I do not do show reports etc but will pass on info from the readers of this blog.  Paragon had a new Indian War Era playset on display and it will be available at OTSN 2013 in the Fall.  Paragon site should have photos etc soon.

We are also told that Ron Barzso was at the show and stated he will do the Yorktown set but it has been delayed.  He will have prototypes etc at OTSN.  This should satisfy folks and I would think and end the flame war between PM editors and Stad. Actually it was a one sided war as the Editors of PM have way to much class to comment.

TSSD also showed an Alamo prototype figure or two and the new buildings.  All reportedly will be available at OTSN.

So it will be a long hot summer it seems with NO new items.  Looks like a great Fall.

Posted by The Collector at 10:30 PM No comments:

Some great photos out there on various forums of the 2013 Texas show.  However that guy in PA wants sales reports, who was in attendance etc.   Just never seems to be happy. LOL LOL

We are glad no one has been reported to have any problems with the weather.  Sales and attendance were both impact by the storms we are told.

-Frank
Posted by The Collector at 5:32 PM No comments: 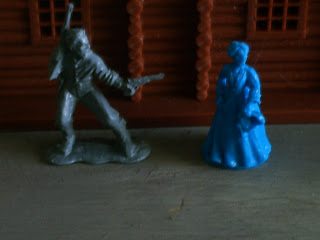 Slave lover!
Posted by The Collector at 4:12 PM No comments: 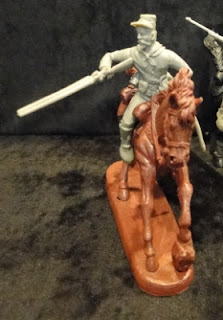 Firing a Full sized shotgun from horseback ?  What were they thinking ?

Posted by The Collector at 3:41 PM No comments:

No wait that's Daniel Boone.  Ok ...Wyatt is too.  I finally got to see and handle the TSSD "Earp" set.  Big boys all around.  Great detail.  Just too big for me.  I am told the Cowboys are big too and I remember an issue of PM reported they were 60-65mm.   That must have upset the folks at TSSD.  But it was accurate.  If I had a set I would mostly put them on a shelf.

I can only hope that his rumored impending release of two sets of Alamo related figures are scaled back somewhat.  I have loads of Alamo figures but will not use them if they are equal in size to Conte's.  Nope I do not use Conte's either.

Posted by The Collector at 7:54 PM No comments: 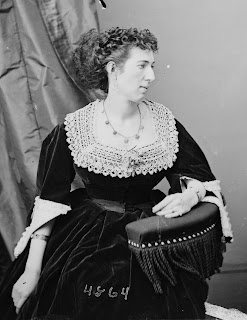 Thank you Belle
And the same to you 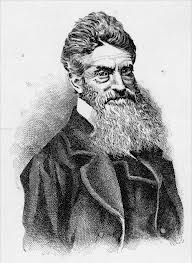 Posted by The Collector at 8:14 PM No comments:

Dead Horses....No, not the Band

....and we threw in a few Falling Horses 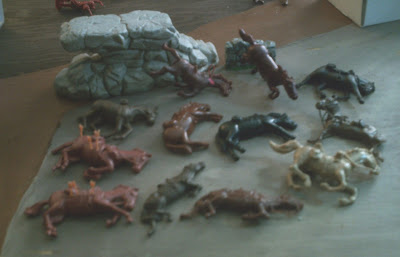 Click to Enlarge
Posted by The Collector at 3:59 PM No comments:

Out of the Weather 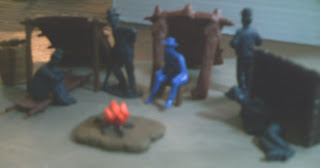 Crude shelters by BMC and Marx.
Please click to enlarge
Posted by The Collector at 3:26 PM No comments: