Still here and still ranting to myself mostly
We wish all of you a Happy Holiday Season. We also remind you lazy people we have a (ugh) Facebook page which we may develop
Posted by The Collector at 8:48 AM 1 comment:

How do you raise your prices when you haven't produced anything in years ?  So this means your OLD STOCK is getting a price raise.  Geez........
Posted by The Collector at 9:33 PM 3 comments:

Look like a load of NEW figures from manufacturers new and old will be hitting the market this fall.  Look for increased prices were are told as China isnt all that hungry for business any more.  Look for some manufacturers coping others as to era.  Alamo and WW2 .  Some are adding to their existing era lines. One interestingly enough is now producing 54 and 60mm limes!  And a 1/72 maker is even doing painted figures.  This looks like on of the more productive years in awhile.  Oh we almost forget the Viet Nam eaa is here too and they ain't made in China so we hear.  Open up that wallet.


Posted by The Collector at 6:52 PM No comments:

Why advertise that your new product fits with Conte ?

And why maintain two separate armies.  One foe the old 54mm and one for the newer54/60mm ?  I guess the choice is yours.   Mr Spock however says it is illogical or you have money to burn.  LOL

Posted by The Collector at 2:12 PM No comments:

SM continues to annoy and disgust me and many others.  Folks creating pages or sites using slight name variations of existing site or pages and drawing away members.  But did I mention that folks have to belong to EVERY site they see.  No loyalty folks.   One fool stated more then one site with exactly the same topic is good. What BS.  And the claims one is easier to navigate then that one.  More BS.  Enter ID enter PW.  All the same folks.  Yahoo groups after a nasty revision still remains the best now kinks are all worked out.  But those who love all these sites.pages and in many cases post the same thing to them all are too enthralled in seeing there posts in print to worry about sticking to one site.
Posted by The Collector at 9:52 PM No comments:

Looks like a lot of new items coming out I am not gonna list them as you most likely know what they are.  I am confused though as I hear from so many that the hobby is dwindling in members and the market is sort etc.  I have heard that Cunnyngham Collectibles has shut down but then I see he is still working on a Marine(s) ??

TSSD has at least to me nosed into the lead manufacturer position.  CTS is close behind IMHO.  The two newest guys Paragon and Austin described as Mavericks are edging up following their own rules.

Marksmen (?) not sure on the name is moving forward with its' Viet Nam era line.  I wonder which one of the old time dealers will leap into making Figures ?

Posted by The Collector at 9:44 PM No comments:

Dealer/Manufacturer  Has now become in most cases an even bigger pain the butt.  Knows all and doesn't really even like collectors LOL   They are demanding and dont understand what product is.

Their ya have it.

And as for shady dealings IMHO opinion they have all had some with the exception of TSSD, AIP and the new guys.  A few have even spent time in jail.

Posted by The Collector at 9:14 PM No comments:

WHy do some post the same statements and/or photos to every related site they can ?
Posted by The Collector at 9:04 PM No comments:

First it seems CONTE has update his site with the usual claims.  Ho Hum

Collectors seem to be more verbal about their political views. See below

Don't we have enough social media ?   Facebook is such a joke.  Here the rift among collectors is most evident.  People get to see the personal side of some their collector friends  And Please don't claim to be a Toy Soldier Collector when you are a Toy collector. Better yet many are just hoarders.  I don't get it and they don't seem to either.

I am told one manufacturer has stated the hobby (Toy Soldier Collecting) is sloqwing down.  Damn again ?  Been hearing that since I started

Hopefully his Lancers will be better but why more of those.  CTS has them covered and in a much more acceptable scale.  Sorry but the coming Pegesus Alamo defenders don't look that well to us.
Posted by The Collector at 1:10 PM No comments:

I see that Playset Mag has FINALY acknowledged that a self proclaimed high and mightly member of this hobby has been sick
Even after the insults this individual printed on his page awhile back indicating PM was called and more or less ignoring the fact.  Wining, bullying, phone calls etc pays off it seems.
Posted by The Collector at 6:49 PM No comments:

The wild boys from South of the border have returned!!!  As always click to enlarge. 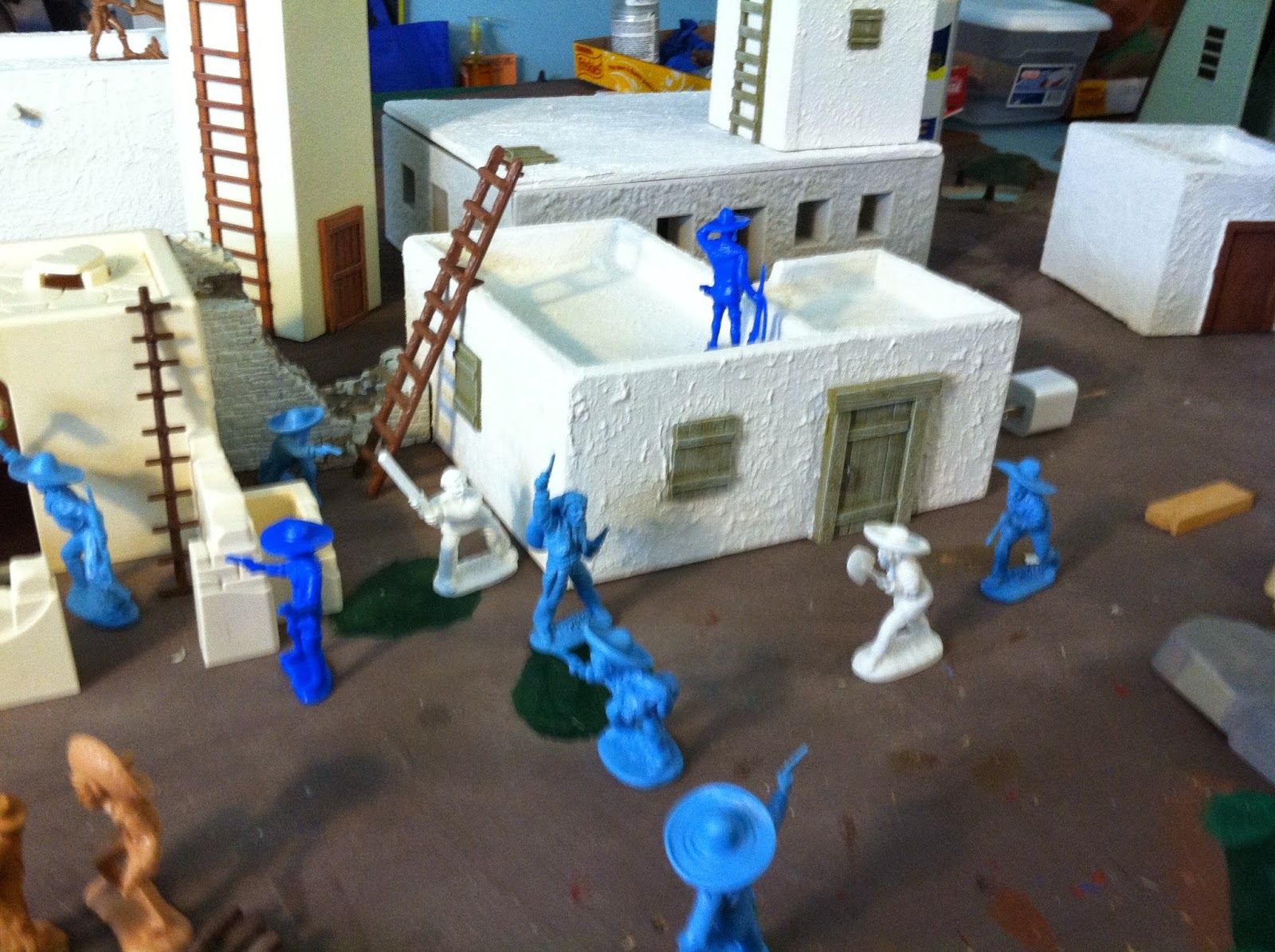 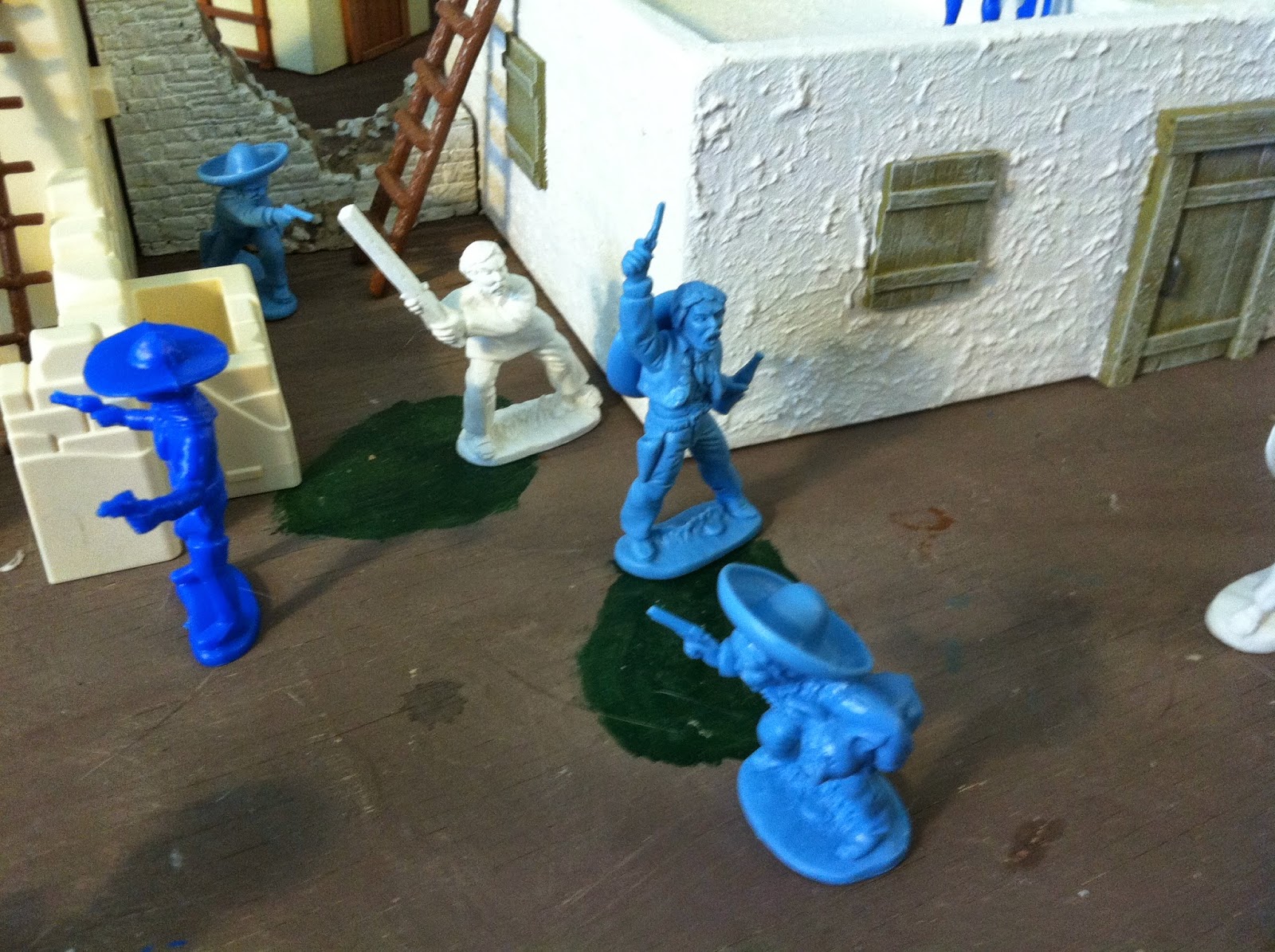 Posted by The Collector at 4:21 PM No comments:

Taking care of the sentry French and Indian War style 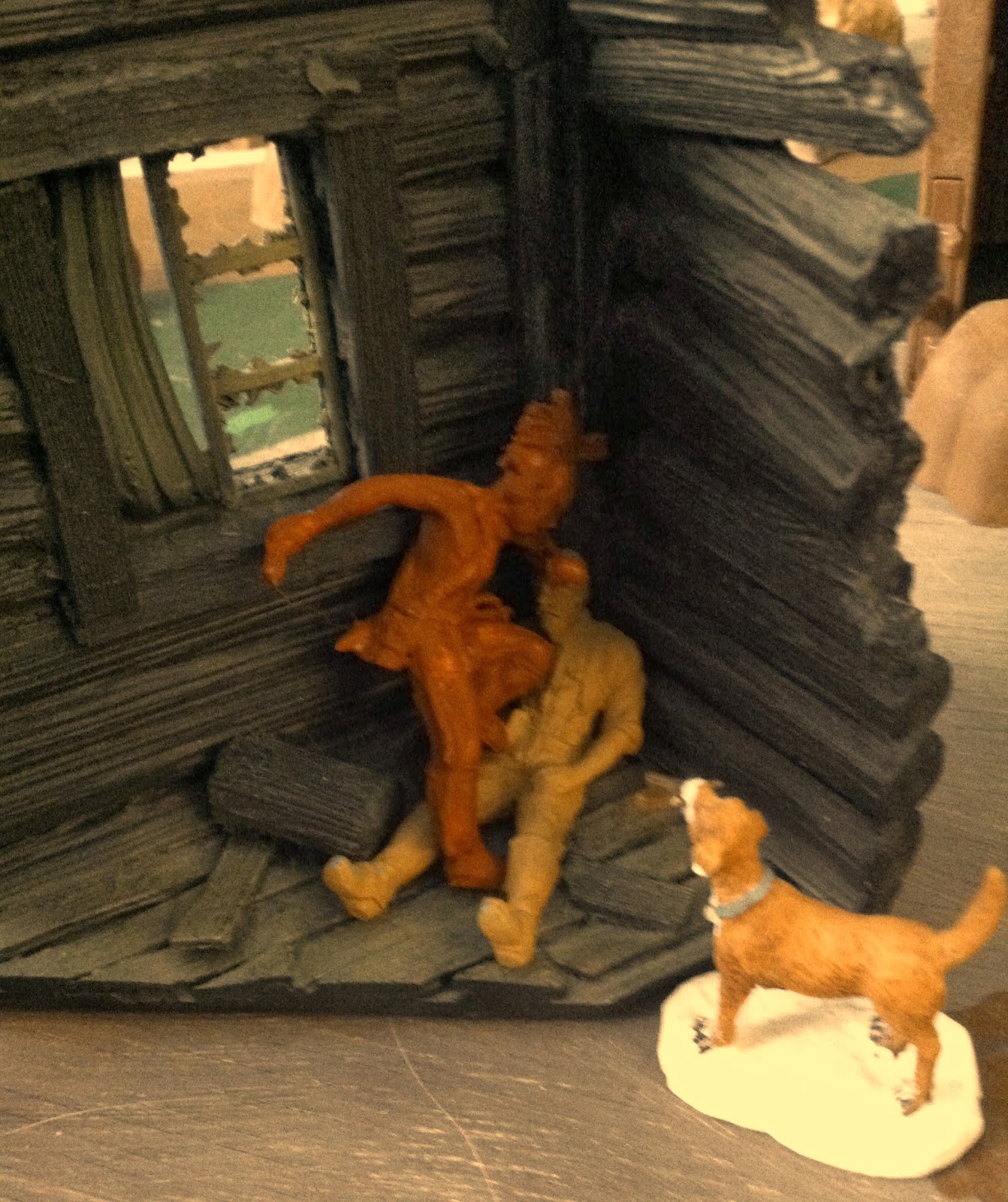 Posted by The Collector at 8:54 PM No comments: 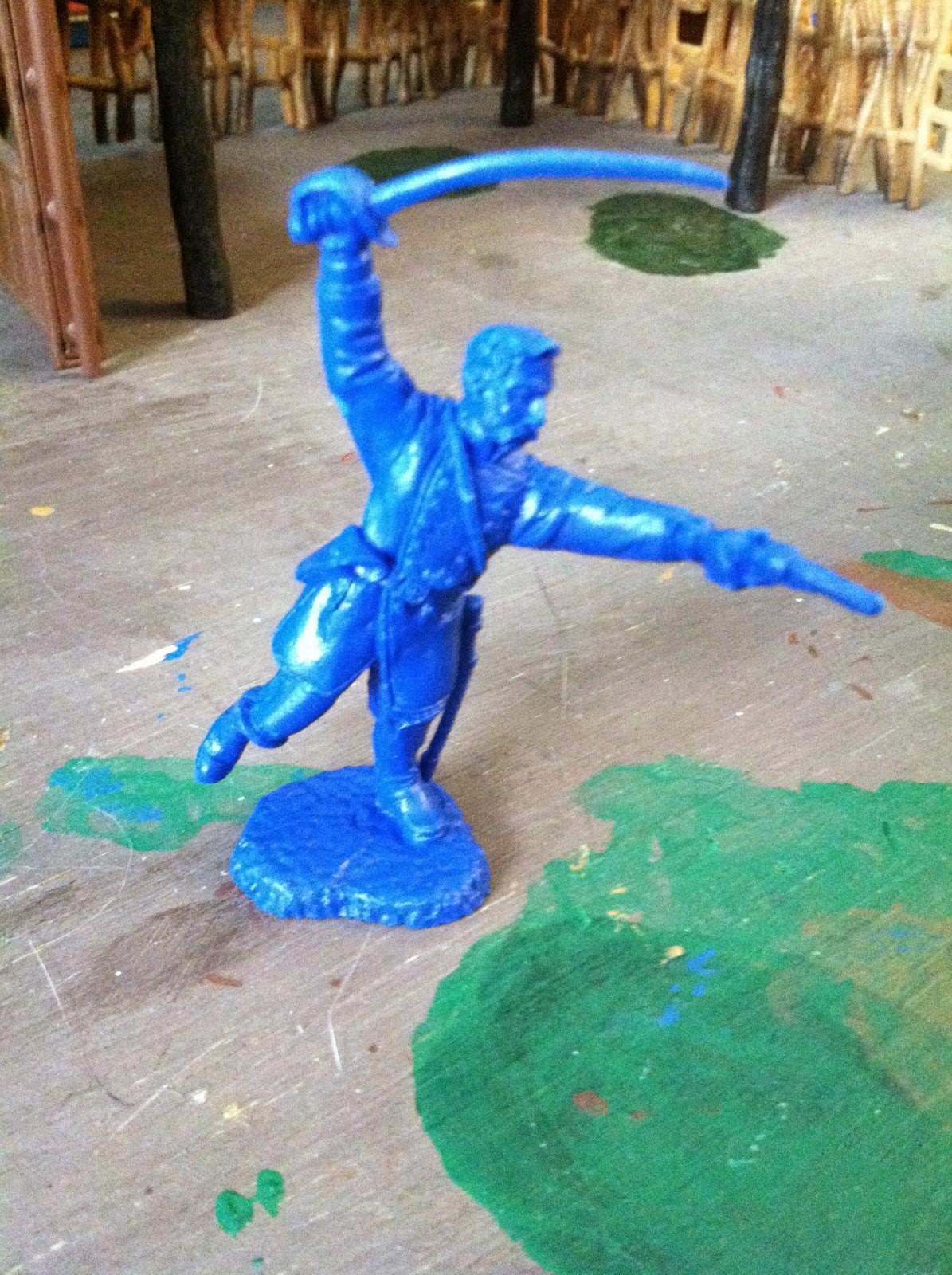 Posted by The Collector at 10:26 PM No comments:

What Tribe are these guys from ? 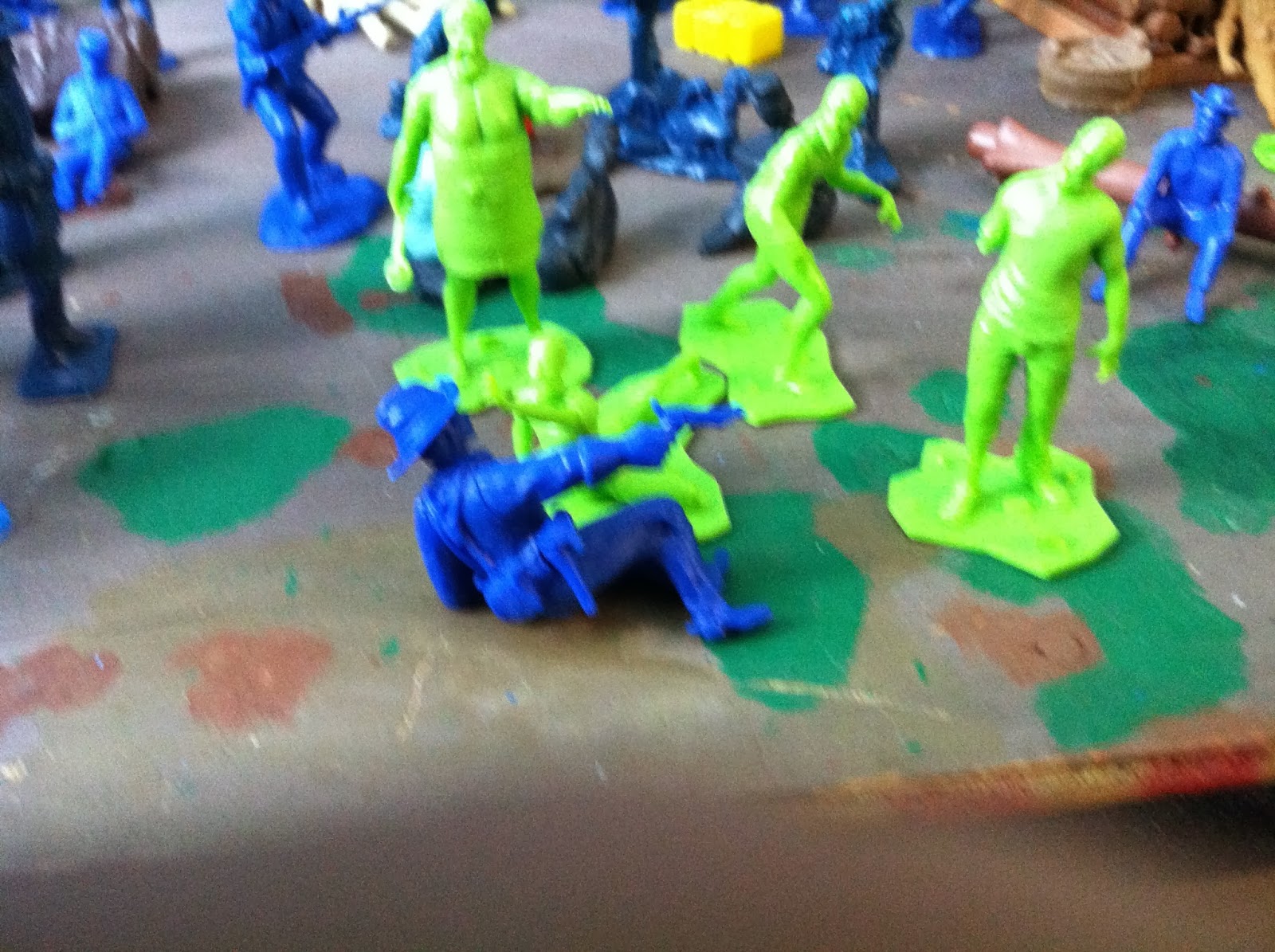 Posted by The Collector at 10:19 PM No comments:

Although another Alamo set has entered the list for 2014 It may not be the year of Alamo figures after all as AIP releases War Elephants in March 2014.  At $25.00 a set (5 sets) collectors are screaming and one other manufacturer has sort of waived that tried old banner stating Support All your Manufacturers efforts.  In the past TSSD even made a statement to that general effect.  With prices already high form the various new Russians dealers like OWN and Asian company X-Force. one has to wonder if CHINA will soon raise the ante on CTS, TSSD, AIP (regular production) Paragon and the other so-called regular dealer/manufacturers .  In any case we find $25.00 a pop for an elephant, special release or not to be be high.  Our wallet will remain closed.  WE wonder too how TSSD made out with the sale of their reportedly incorrect War Elephant ?
Posted by The Collector at 7:37 PM No comments:

The Alamo seems to be the darling of 2014.  Both TSSD and Paragon have announced sets for OTSN 2014.  TSSD will release Cavalry while Paragon will do Defenders.   K & C is also releasing an Alamo set or two.  Only Paragon has released photos.  Many feel the poses are from their others sets (who really cares?) and do not care for the head gear.  We agree ion this point.   Our question involved the fact this is another small set.  Their smallest yet with just 4 figures and a few extra heads.  No cost is listed but we have a feeling they will not be cheap.  Small sets to us mean a limited run which means a higher price.   Then why these smaller sets?  Do manufacturers envision smaller sales ?  Lots of question in our minds which we will address later.  And by the way as these (both) sets are in the newer scale they will find no place in the ranks of my Alamo defenders.

Both are to be commended for continuing to produce their fine lines of figures
Posted by The Collector at 4:38 PM 2 comments: